Billions have been spent on education with little to show for the efforts. 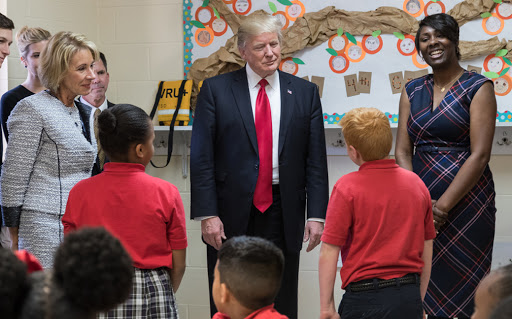 Amidst the ongoing political noise and distractions in Washington, D.C., President Trump continues to focus on and address the nation's most deep-seated problems.

In the wake of signing a temporary funding bill to get the government back open, the president directed attention to one of our biggest problems. Education.

We have a president keenly aware of the need to fundamentally change the status quo in our education system. And one indication of this pledge is his selection of Betsy DeVos as secretary of education.

DeVos spoke recently at the American Enterprise Institute in Washington, and she delivered remarks about the state of education in America that were courageous.

She spoke about the mediocre performance of our students, compared to those in other nations of the world, in the Program for International Student Assessment. Why, when we have among the highest education spending in the world per student, should American students be ranking 23 in reading, 25 in science and 40 in math?

Even by our own measures in our National Assessment of Educational Progress, known as the Nation's Report Card, the results remain disappointing.

Billions have been spent on education with little to show for the efforts.

"Federally mandated assessments. Federal money. Federal standards. All originated in Washington, and none solved the problem."

We had the No Child Left Behind Act under President Bush, and the Race to the Top Fund under President Obama. Different approaches, but the same power, control and money coming from Washington.

"The bottom line is simple," said DeVos. "Federal education reforms have not worked as hoped."

A number of left-wing journalists today are questioning the mental health of our president.

But DeVos' brutally honest assessment about the state of education in our country shows that if we have a mental health problem, it resides with those who keep pushing more and more government when this approach consistently fails us.

"Insanity," reportedly said Einstein, "is doing the same thing over and over again and expecting different results."

How, in a country so diverse in values as ours, can we possibly have government controlling how all children are educated?

How, in a country that values human freedom, as we allegedly do, can we prevent parents from deciding how to educate their children?

One bombshell that Betsy DeVos dropped in her AEI remarks is that federally imposed performance standards in reading and math — know as Common Core — is "dead" at the Department of Education. Not because of ideology. Because these federal standards demonstrably do not work.

Few would disagree that America's economic and political freedom is the source of our strength and prosperity. Yet, how can we deny America's secret of success to the marketplace of greatest importance to our future — education?

It's not unreasonable to think that one reason the stock market is booming is that our American leadership has the courage to bring real change. Educational freedom is at the core of a new American prosperity.