Rick Santorum is right about morality and economy

Santorum insists that there is a "moral component" to economic problems and that claims that one can be discussed meaningfully without the other are bogus. 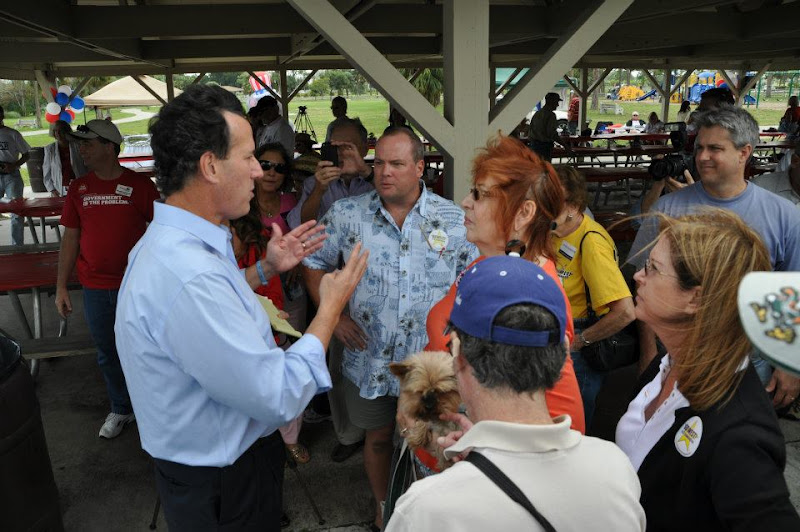 Rick Santorum has announced his "Faith, Family and Freedom" tour in Iowa.

Santorum may be dragging the rear in the line-up of Republican presidential candidates, but I am grateful to him for being the only candidate who insists that the so-called "social issues" remain an integral, explicit part of his agenda.

That's not to say that the other conservative candidates disagree with Santorum's take on these issues -- traditional values, abortion, marriage -- but Santorum has been the only one to insist that you cannot consider the economy independent of the way the individual human beings who make up the economy behave.

McLaughlin says, and he's far from alone on this, that candidates at this time should just be talking about the "stuff that is putting money in people's pockets."

Santorum insists that there is a "moral component" to economic problems and that claims that one can be discussed meaningfully without the other are bogus.

Consider for a moment the morass in which Herman Cain has found himself in recent days.

Let's look beyond what Cain may or may not have done. Let's just look at the platform from which he is being attacked and which, at least for the moment, is giving indigestion to his explosively successful presidential run.

Sexual harassment and sexual discrimination law is part of the Civil Rights Act of 1964.

The definition of sexual harassment has expanded and become increasingly vague over the years, and increasing power has been granted to complainants to sue for damages.

What has happened is, like the whole agenda associated with race, that a profoundly serious moral issue has become politicized and, rather than the law being the focal point for dealing with a bona fide moral problem, it has become just another entitlement platform.

We now live in an entitlement culture where at minimal personal costs to the claimant, people can frivolously sue for what they claim is their due.

A journalist writing about the Cain case noted that in his own office, he avoids all personal statements about appearance with female employees, like commenting about a new hairstyle.

In an interview segment, CNN's Erin Burnett asked Newt Gingrich if it is fair game to be checking "morality in a presidential candidate."

But is this really about morality?

No. It's about a society that on the one hand wants to claim there is no place for traditional values in the public space but at the same time wants a society that is fair and just.

If religion and traditional values are not the standard and if personal responsibility is not the means, how do you get from point A to point B?

The answer is politicians and bureaucrats write laws and regulations that allegedly achieve these just ends.

We get a society that tolerates a million abortions a year but will bear hundreds of billions of dollars of costs in frivolous lawsuits, motivated by alleged fairness and justice.

We live under the costly illusion that we can write rules and laws that will displace traditional truths and personal responsibility.

I think it is a sign of our deeply troubled and lost society that so many don't grasp the validity of Santorum's claim that morality and economy cannot be separated.