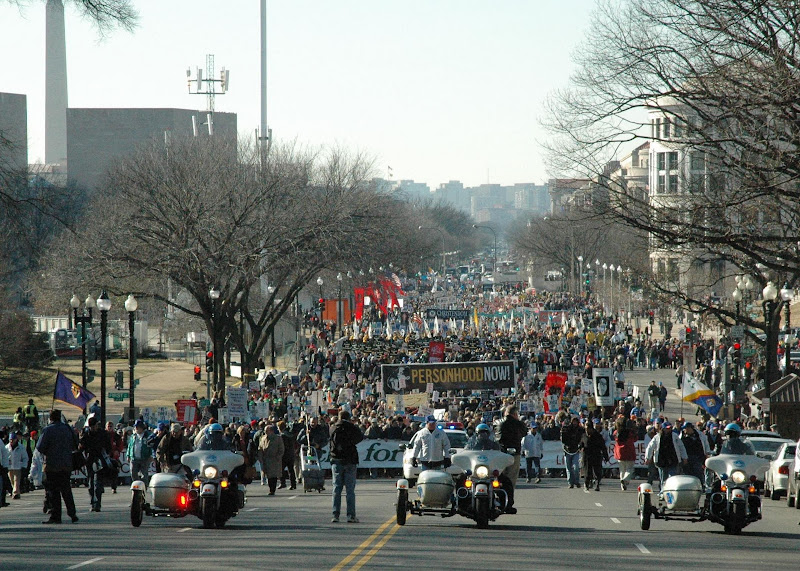 The 5th U.S. Circuit Court of Appeals gave good reason for celebration for the hundreds of thousands who will arrive in Washington for the 39th annual March for Life on Monday.

The court last week upheld the constitutionality of a new law in Texas requiring that abortion providers do ultrasound exams and that a woman listen to the physician's description of her unborn child and to the heartbeat before deciding whether to abort.

The law, signed by Gov. Rick Perry in May, was blocked by a federal district court in August. It argued that the law impinged on the free-speech rights of abortion providers.

Ultrasound images of unborn children are turning the abortion game around, which is why abortion providers and organizations such as Planned Parenthood that promote the barbarous abortion regime are so on edge about the decision.

Seeing ultrasound images has a major impact. Estimates vary widely on the percentage of women who intended to abort but changed their minds after seeing an ultrasound image. My own anecdotal surveys, from crisis pregnancy centers around the country that I work with, indicate that anywhere from 62 percent to 95 percent reconsider.

Focus on the Family reports that 84 percent do. The nonprofit Christian organization also operates a generous program called Operation Ultrasound, through which it provides ultrasound equipment and training to crisis pregnancy centers that apply.

According to Nancy Northrup, president of the Center for Reproductive Rights, which is challenging the Texas law, "If this decision stands, it opens the floodgates for other states to insert themselves in an inappropriate way between doctors and women seeking medical care."

What can you possibly conclude from a movement that labels itself "pro-choice" and that opposes ensuring that women who make a decision as serious and grave as abortion have as much vital information as possible before making that choice?

Good information is the oxygen that enables good decision-making. The answer to the question is that the movement labeling itself "pro-choice" is not about promoting choice at all. It is about promoting abortion.

It is why the so-called "pro-choice" movement opposes efforts to better provide women -- disproportionately young, poor, minority women -- with information that raises their awareness and understanding of what they are doing.

We might recall the impact that television images had after Hurricane Katrina, when the reality of poverty in America suddenly was out there for all to see. No one could look away from this ugly and unpleasant truth.

Including our politicians. Our nation's capital has one of the nation's highest poverty rates (19.9 percent, compared with 15.1 percent of Americans overall in 2010, according to census figures). Any member of Congress can see it by just walking a few blocks from the U.S. Capitol. But suddenly, when the images were on national television, the politicians were out there pontificating.

An ultrasound image of an unborn child is the same type of media event. Suddenly, the mother-to-be sees what she didn't know or perhaps knew and wanted to avoid confronting: that she is the bearer of human life and that she is close to murdering the very life that she chose to help create.

According to Americans United for Life, a public-interest law and policy nonprofit, 460 pieces of related legislation were considered in state legislatures around the nation last year.

The forces promoting ignorance are losing and light is shining through.

It is reason for optimism that increasingly more Americans grasp that for a free country to function, we need informed and responsible citizens.

We need appreciation that our choices matter -- and that the most important choice, as we learn in Deuteronomy, is to choose life.