Voter rights are not free

A free society will soon not be free if the citizens in it see their freedom as something that should arrive effortlessly, free of personal responsibility. 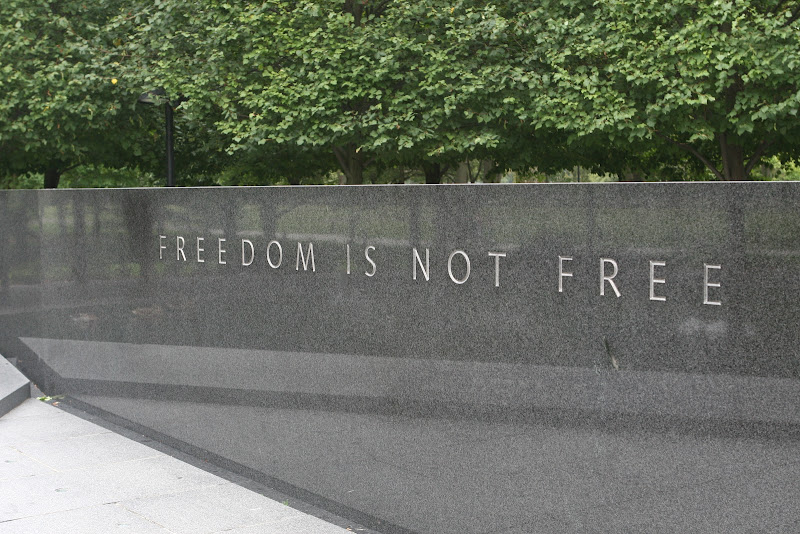 Engraved large on one of the walls of the Korean War Veterans Memorial on the National Mall in Washington, D.C., are the words "Freedom is not free."

It is sad that so many are unable or unwilling to appreciate the truth of this simple phrase, or are ready to heed those who have power, or seek it, who distort it.

I cannot think of anything hurting us more today than false and confused notions about the nature of the ideal of freedom.

Recently, Rep. John Lewis (D-Ga.) appeared on Chris Matthews' Hardball show and, in discussion about voter ID laws, he said that voting should be as easy as "getting a glass of fresh water."

He equated requiring a picture ID to vote to Jim Crow laws and poll taxes.

It is particularly troubling to hear this from Lewis, a battle-scarred veteran of the civil rights movement.

The National Mall and the streets of Washington are filled in the summer with tourists -- many families with kids -- visiting our capital. They can see the collection of symbols and memorials across the Mall testifying to the truth that "Freedom is not free."

A five-minute walk from the Korean War memorial is the new Martin Luther King, Jr. Memorial, which serves as a reminder of the struggles of the civil rights movement.

A few minutes in the other direction is the National World War II Memorial.

And heading back around again you encounter the sad swath of black stone in which the names of over 58,000 lost in the war in Vietnam are engraved.

Looking out over it all at the base of the Reflecting Pool is Abraham Lincoln, who presided over the blood bath in which more than half a million Americans died in the internecine struggle for the nation's survival and ideals.

A short ride over Arlington Memorial Bridge takes one to Arlington National Cemetery and the flowing green pastures filled with uniform white gravestones of our soldiers fallen fighting our many wars.

The struggle to protect and maintain a free society and to build on it so that we can continue to climb higher never ends.

Certainly someone who put his life on the line struggling for civil rights, like John Lewis, should know this.

How can he possibly conclude that voting -- the privilege to make one's voice heard as part of the ongoing deliberations central to our enterprise of advancing human freedom -- should be as easy "as getting a glass of fresh water?"

A study published earlier this year by the Pew Center on the States characterized America's voter registration system as "Inaccurate, Costly, and Inefficient."

In 2008, the Supreme Court considered Indiana's voter ID law, which the New York Times then reported was "considered the strictest in the country," and found it constitutional.

Every American should celebrate efforts requiring responsibility for clear proof of identity when registering to vote. And every American should appreciate the importance of efforts by states, like that taking place now in Florida, to update and ensure the honesty and integrity of voter files.

Freedom is not free. To the extent that Americans of any background do not appreciate this, we will long for the days when we were free.