Where's the CBC concern about the illegal drugs smuggled into the U.S. from Mexico that cause havoc among black youths? 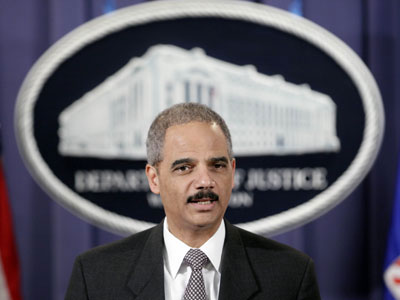 When the House voted Thursday to find Attorney General Eric Holder in criminal contempt of Congress, members of the Congressional Black Caucus walked out.

Why is the Black Caucus trying to make this about race?

It's about Holder's refusal to turn over Justice Department documents requested by the House Committee on Oversight and Government Reform in its investigation of the "Fast and Furious" operation.

Fast and Furious was a "gun-walking" operation conducted by the department's Bureau of Alcohol, Tobacco, Firearms and Explosives. ATF would allow known smugglers to purchase arms from dealers in Arizona, intending to trace them to their destination with operatives in drug cartels in Mexico.

Before the vote, the Black Caucus' chairman, Rep. Emanuel Cleaver, D-Mo., appeared on CNN calling the House contempt vote "silly and detrimental to one human being." On MSNBC's "Politics Nation," he told host Rev. Al Sharpton, "This is partisanship at its most base level."

Sure, it's an election year. And if you had to stretch to appreciate the complaint against Holder being made by Rep. Darrell Issa, R-Calif., chairman of the House committee doing the investigation, you might buy Cleaver's claim that this was just Republican political grandstanding.

But you don't have to stretch to appreciate the case against Holder.

It seems pretty clear that Fast and Furious was a botched operation. The ATF lost track of some 2,000 weapons that disappeared into the hands of criminals in Mexico. In December 2010, weapons traced to this operation were found on smugglers who murdered U.S. Border Patrol agent Brian Terry. Others were tied to the murder of at least 200 Mexican citizens.

The Justice Department, in a letter to Grassley, initially denied the existence of gun-walking operations. But this picture changed when ATF whistleblowers brought facts to the contrary to light. Subsequently, Justice withdrew its letter, saying its denial of these operations' existence was mistaken.

Inconsistencies in Holder's testimony before the House committee produced further reasons for suspicion. And then Holder stonewalled for months, refusing to produce the documentation the committee requested.

Whether there is a fire here remains to be seen. But there is plenty of smoke.

Yet Cleaver calls the House vote holding Holder in contempt "silly?" The Black Caucus chairman should have the opposite reaction, if only for concern for his own community. Illegal drugs smuggled into the U.S. from Mexico cause havoc among black youths. According to the Center for American Progress, there have been more than 25.4 million drug convictions in the U.S. since 1980, and one-third of them were of blacks.

To grasp what's really motivating Cleaver, I apply what I call the "Time to Kill" test.

In the 1996 film by that name, a black man in a Mississippi town hires a white lawyer to defend him after he kills two white racists who raped and mutilated his daughter. When the lawyer makes his closing argument, he asks members of the jury to close their eyes. He describes the atrocities done to the girl and concludes: "Now, imagine she's white." His black defendant is acquitted.

So close your eyes. Consider the details about Fast and Furious and then picture that the attorney general is not Eric Holder but John Ashcroft (who'd served under President George W. Bush) and that the murdered border agent, Terry, is black.

Would Cleaver now call this contempt vote "silly?" Would the Black Caucus walk out?

For the Black Caucus, this is about racial politics.

Fortunately for us, for Issa (who happens to represent my home district in California), this is about shedding light on what might be broken in ATF operations.