How is it that, after almost four years of terrible economic results that Obama's persona is not more tarnished? 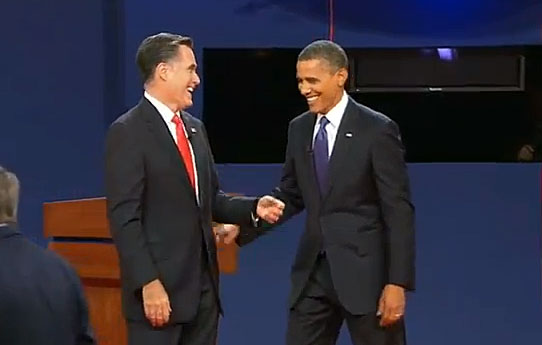 Can the same thing happen in politics? Can a skilled politician, who has become popular with soaring rhetoric and promises, deflate when it starts becoming clear that he is not going to deliver?

Of course, I am thinking about our president.

Mitt Romney demonstrated in the first presidential debate that the considerable gap between President Barack Obama's rhetoric and his performance makes him a vulnerable candidate.

Yet, the president's bubble is far from bursting.

Romney, in the debate, was aggressive but deferential toward Obama. He was deferential because, despite the poor state of the country after almost four years of the Obama administration, Barack Obama is still a popular president.

Recent polling shows his approval remains around 50 percent. At similar stages in the presidencies of the last two presidents voted out after one term, George H.W. Bush and Jimmy Carter, their popularity ratings were in the 30s.

What accounts for Barack Obama's Teflon? How is it that, after almost four years of terrible economic results -- high unemployment, sluggish growth, huge deficits and mounting national debt -- that Obama's persona is not more tarnished?

Shouldn't today's economic facts on the ground be sufficient to puncture the Obama bubble?

One part of the answer to this puzzle is the changing demographics of the country.

The United States today is a nation that is much less white, much less married and less traditional than it once was. These are growing trends and each reflects in at least some large part constituencies with values supportive of Obama's worldview -- activist government and moral relativism.

What was once the exception to the rule in America -- not being white, not being married, not having traditional views on family, sex and abortion -- is now becoming the rule. And these constituencies are becoming sufficiently large to elect a president.

National Journal released a poll right before the debate showing Obama and Romney dead even nationwide -- 47 percent each -- among likely voters.

Obama was elected in 2008 with 43 percent of the white vote. It appears that he could be re-elected with even less.

And his approval among married voters is 40 percent compared to 57 percent among those not married.

According to data compiled by the Tax Foundation, the large majority of those now filing tax returns in the United States are single. In 1960, 65 percent of all tax filers were married and 35 percent single. In 2010, it was reversed -- 61 percent of filers were single and 39 percent married.

When Obama pushes for taxing the rich, he's not just pitting those with the highest incomes against everyone else. He's pitting married against singles. Eight of 10 tax filers in the top 20 percent of earners are married. The majority of filers at the middle income and below are single.

It's really a cultural divide, one you can be sure that Obama is very aware of, that is keeping his bubble inflated.

The fact that Obama's support is still this strong despite his terrible record sends a clear warning to those looking for a new birth of American freedom.

Romney and Rep Paul Ryan should consider taking these constituencies on directly -- blacks, Hispanics, singles -- and explaining why America's future hinges on shutting down the government plantation.