What really should be provoking fear is not that there are committed conservatives who want genuine change but that Americans are becoming resigned that real change is not possible. 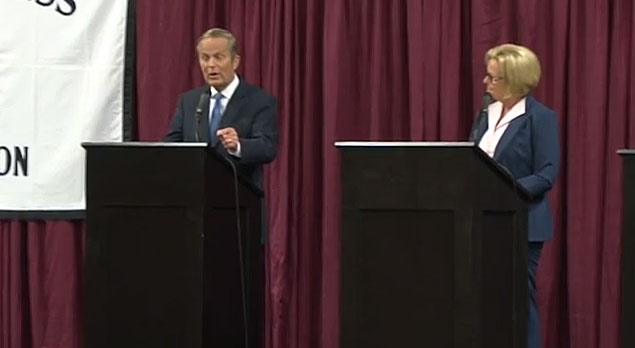 It's big news that Akin is still alive and kicking despite being abandoned by the national Republican Party leadership.

Akin, who refused to succumb to pressure from his own party leadership to get out of the race after poorly expressing himself in an interview on the issue of rape and abortion, has been left to his own resources and friends to raise funds.

According to the just-published fundraising report for the last quarter, going through September, McCaskill outraised him by a ratio of almost 4-to-1.

This contest captures the stark contrasts that delineate the most fundamental, rawest political currents of the country today.

On one side, we have McCaskill mouthing every predictable liberal position on all issues. You wouldn't really even need her if you could operate a Senate seat off your iPad with an app called "liberal."

Meanwhile, in Akin we have a conservative who actually believes that the blessings of freedom depend on traditional values, limited government and personal responsibility. This opens him to caricature from liberals and provokes fear in establishment politicians.

According to the St. Louis Post-Dispatch, in its recent endorsement of McCaskill, "Todd Akin ... comes out of the new incarnation of the Missouri Republican Party, the one based on peddling simplistic solutions to fearful "values voters."

The U.S. Census Bureau reports that for the years 2006 through 2010, 26 percent of the population of St. Louis, which is almost half black, lived below the poverty line.

It doesn't seem to faze the Post-Dispatch's editorial board that poverty in its own city persists at levels 60 percent above the national rate. It's more concerned about a conservative getting elected, who might actually try to do things differently.

Whereas insanity is doing the same things and expecting different results, doing things differently -- like freeing up poor parents to send their kids to church schools and promoting politically incorrect traditional values -- is, for liberals and the Post-Dispatch editorial board, simplistic.

According to the Economic Policy Institute, St. Louis' black unemployment rate in 2011 was 14.9 percent -- the ninth highest among metropolitan areas in the country.

In 2010, the graduation rate in St Louis public schools, according to the school district, was 60 percent.

In Education Week's recently published ranking of public school systems nationwide, Missouri is rated No. 41 out of 50 states and the District of Columbia.

These bleak statistics are not new. This has been going on for years.

In St. Louis, and in the nation's largest urban areas, we see all the same chronic and persistent pathologies.

Poverty, hopeless urban schools and chronically high unemployment among minorities are becoming a way of life in our country. What really should be provoking fear is not that there are committed conservatives who want genuine change but that Americans are becoming resigned that real change is not possible.

The McCaskill-Akin faceoff is really about what is happening in the country nationwide.

Maybe in the best of times, views from different political parties can be about splitting hairs. But in times like this, we're talking about being at a crossroads and recognizing that our problems exist at the core of how we choose to see the world and define our lives.

According to the latest Gallup poll, only 3 of 10 Americans are satisfied with how things are going.

The fact that a persistent, principled and uncompromising conservative like Todd Akin can keep his candidacy viable under such challenging circumstances shows there's a healthy constituency of Americans who understand that what is wrong is we've lost our principles and values.