Does anybody believe that if we were designing a national retirement program from scratch we would come up with what we now have? 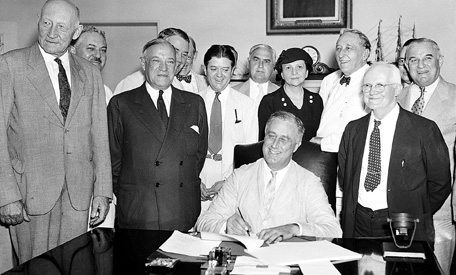 The annual Trustees Report for Social Security has just been issued and the news is that there is no news. Social Security is on its way over a fiscal cliff - just as we hear every year when the report is issued.

According to this year's report, Social Security will be insolvent in 2033 -- 20 years from now, when those now 47 years old will be eligible for their full promised benefits.

Nothing gets done because the heroes representing us in Washington won't act on anything politically tough until emergency sirens force them.

Social Security is a tax-and-spend program, not an investment program. Current retirees get their money from the payroll taxes paid by those currently working. As the number of workers per retiree drops, which has been the inexorable trend as Americans live longer and produce fewer babies, the only way to "save" Social Security is through some combination of tax increases or benefit cuts.

Unfortunately, the only discussions that are now taking place involve trying to find clever ways to achieve these tax increases and/or benefits cuts.

I think this is a mistake. Social Security was passed in 1935 and its structure today is basically the same as it was then. Do you know any business that is operating the same way as it was three-quarters of a century ago?

I believe we should rebirth the idea of changing Social Security into a real retirement investment program. Let's get off this thing about "saving the system" and start thinking about making the lives of individual Americans better.

Does anybody believe that if we were designing a national retirement program from scratch we would come up with what we now have? No way. And if not, it is no excuse to avoid change because it is politically hard.

It was supposedly a given, after the big stock market decline during the recent recession<, that> the idea of personal retirement accounts was dead forever. But this is like deciding, after getting caught in a rainstorm, to never go outside again.

Anyone who thinks that investing in the American marketplace over a 45-year working life won't pay off doesn't believe in the future of the country. And if the country doesn't have a future, where exactly will the government get money to pay Social Security benefits?

William Shipman and Peter Ferrara examined the theoretical case of a couple, earning average incomes, whose Social Security taxes went into a personal retirement account broadly diversified in stocks over their full working life. They retired in 2009, after the stock market crashed in 2008.

The results, published in The Wall Street Journal in 2010, showed that even though they would have lost 37 percent of the account's value in 2008, they still would have retired with $855,175. That could provide retirement payments 75 percent higher than they would have gotten under Social Security.

When the idea of changing Social Security to personal retirement accounts was looked at under President George W. Bush, naysayers on the left pushed back, saying this was just for rich people.

But it's just the opposite. Rich people already own stocks and build wealth this way. It's low-income Americans who need the opportunity to build wealth.

According to the Pew Research Center, 55 percent of white Americans own stocks, but only 28 percent of blacks and 17 percent of Hispanics do.

As result, as the stock market has recovered since 2009, the wealth gap has grown even greater. According to Pew, between 2009 and 2011, the mean net worth of the wealthiest 7 percent of households increased 28 percent and dropped 4 percent for the other 93 percent.

It's time to close the door on a bankrupt, antiquated Social Security system and give every working American the opportunity to build wealth and share in the American dream.