The funds that pay for the fear and disinformation campaign come from groups who really are hurting black Americans. 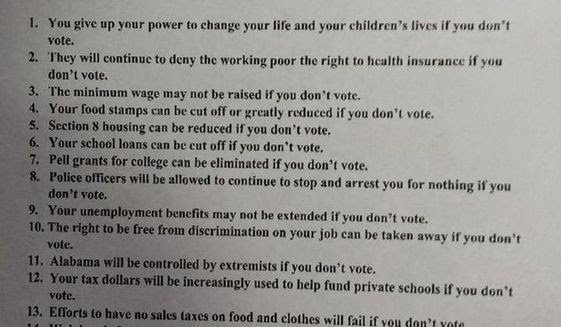 Some call the fear and hate ad campaigns being orchestrated by Democratic Party supporters to boost black turnout in next Tuesday’s congressional elections desperation.

I call it pathetic.

The way for a Party to get support is to deliver success. When there is no record of success, lies, distortion, and fear become the operative tools, in hope that uninformed voters will buy the garbage.

A flyer being distributed by Georgia’s Democratic Party shows two dark-skinned black children holding a sign saying “Don’t Shoot,” suggesting that somehow voting for Democrat candidate Michelle Nunn will stop a tragedy in Georgia, like the recent shooting of black teenager Michael Brown in Ferguson, Missouri by a police officer.

Or an ad in North Carolina suggesting that a vote for Democrat Kay Hagan will prevent President Obama from being impeached.

Another in Arkansas shows pictures of blacks in distress and suggests that conservatives are out to strip blacks of their rights and protections under the law.

There could not be a more telling sign that many Democrat candidates are about to be turned away by voters than the large sums of money being spent targeting the Democratic Party’s most loyal constituency, blacks, knowing that they are losing interest because there is no good news.

But here’s the worst part.

A sizeable chunk of the funds paying for this fear and disinformation campaign is coming from groups who really are hurting black Americans.

Certainly there is nothing more damaging to black progress and improvement then the concentration of failing public schools in black urban areas.

As I wrote several weeks ago, days before Michael Brown was killed in Ferguson, Missouri, he received his useless high school diploma from a public school that had just lost its accreditation from the Missouri State Board of Education.

If there is anything that black Americans are becoming more aware of is the desperate need for alternatives to public schools.

And no groups are more committed to making sure those alternatives do not become available than America’s two huge teachers unions – the National Education Association and the American Federation of Teachers.

Combined funding to candidates, uniformly Democrats, from these two unions in this campaign cycle stands currently at $34 million. But over and above this, combined independent expenditures of the two unions, which find their way into ads like the ones described above, stand at $6.7 million. These are among the largest independent expenditures of any groups in the country and they 100 percent go to either attacking Republicans or supporting Democrats.

Then we have Planned Parenthood of America and its affiliates around the nation, with independent expenditures – again 100 percent of which go to either attacking Republicans or supporting Democrats – and certainly going into these black-focused ad campaigns – of $5.3 million.

What more do blacks need to know than that the sick, vacuous political campaign of hate and fear targeting them is significantly financed by those who want to assure that poor black children stay in failing schools and that unborn black children do not enter the world.

Black Americans need their children educated, their families intact and healthy, and jobs.

Democrats have failed them across the board. Well-financed lies won’t mask the truth.

It’s time for change, and blacks and Democrats know it.