The basis of humanity, civilization, and decency is respect for and awe of the miracle of life. This must take precedence over all. 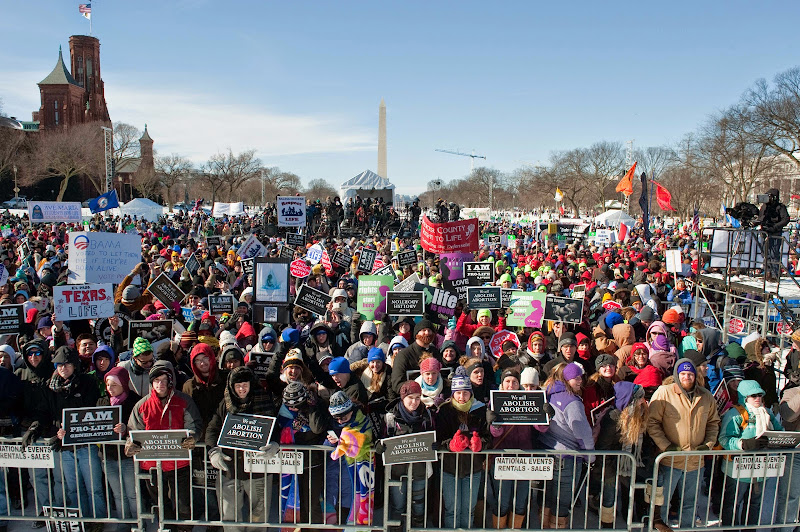 This Thursday, January 22, hundreds of thousands will march in Washington, DC in the annual March for Life. This notes the 42nd anniversary of the Roe V. Wade decision, which legalized abortion and began a barbarous era in which 57 million unborn American human beings have been lost.

As I type these words on my Apple computer, I consider the likelihood that this device would not sit in front of me if abortion was legal in 1955 when Apple co-founder Steve Jobs was born to an unwed graduate student and put up for adoption.

There is one message that these “pro-lifers” who will arrive in Washington, DC will convey to their nation and yes, to the world at large.

The message reduces to two words conveyed in the Bible, in Deuteronomy – “Choose Life.”

I see a parallel between this turnout in our nation’s capital, to awaken the consciences of fellow citizens to the sanctity of life, and the huge crowds that recently poured into the streets of Paris in protest against terrorism.

Even the sick, confused maniacs who snuff out innocent life in acts of terror do so out of dissatisfaction with the world as it is and out of the most misguided sense that somehow their barbaric acts make things better.

We in America watch out of concern and wonder how we can stop the craziness.

But a fundamental part of the battle is not getting adequate attention. And the March for Life is about bringing attention to where attention is needed.

Darkness must be battled with light. Death must be countered with life.

America must show the world that America is about choosing life.

But we are not much of an example and our light flickers when within our own borders we permit the casual destruction of our unborn human life and potential.

Even worse. We allow funds of our taxpayers to support those who promulgate the destruction and darkness.

Even American rappers know something is wrong with abortion.

Rapper Nicki Minaj conveys the anguish and confusion in discussing, in a recent Rolling Stone Magazine interview, the abortion she had when she was in high school.

“It was the hardest thing I’d even gone through….(It’s) haunted me all my life.”

Rapper Lecrae similarly has shared his pain and conveys that the anguish of abortion touches the fathers as well as the mothers. His song “Good, Bad, and Ugly” is about his guilt and pain following the abortion of a child he fathered.

More Americans must begin to grasp that abortion is not a “social issue” that sits on the sidelines of a mainstream agenda of issues of concern to the nation.

Respect for life stands at the center, not at the margins, of what our country is about. When we don’t begin by respecting life, by awe and humility and awareness of the miraculous, there is no way we can have a decent, just, and free society.

The new Congress will introduce and likely pass legislation, coincident with the March for Life, that bans abortion of unborn children at 20 weeks - 5 months - allowing exceptions for rape, incest, or danger to the life of the mother.

Let’s support this. Let’s begin 2015 with America starting to shine light across the world and providing the leadership that everyone, everywhere seeks.

Let’s show the world, and ourselves, that Americans “Choose Life.”