Could Rand Paul oppose Loretta Lynch and not be a racist?

Who is looking out for black interests -- the Black Caucus or the white Republican they call a racist? 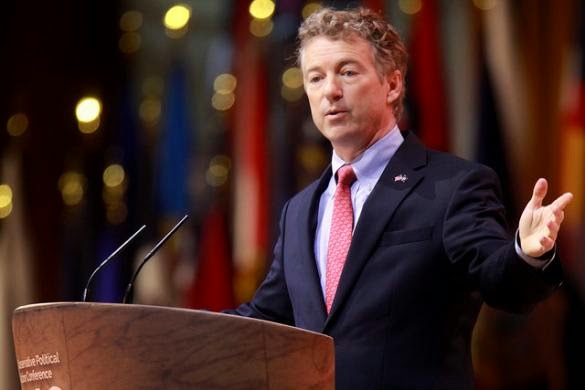 The Congressional Black Caucus will forgo no opportunity to retard black progress in America and undermine the ideals that were once understood to be the goals of the civil rights movement.

In the latest example, the caucus has issued a press release calling Senator Rand Paul (R-KY) a racist for opposing confirmation of Loretta Lynch as the next U.S. Attorney General.

Paul earlier issued a press release stating three reasons for his opposition to Lynch. The caucus ignored two and called the third, her support for civil asset forfeiture, "...nothing but an excuse to keep an African American legal scholar from holding this high position..."

Those that wonder why race consciousness remains at high pitch in America, a half century after enactment of the Civil Rights Act and other laws associated with the civil rights movement, need look no further than the Congressional Black Caucus and understand that they want it this way. They want to keep color rather than ideas and character to be the measure of people.

Calling Rand Paul a racist is particularly, and pathetically, ironic in that he has probably been the most aggressive Republican office holder in reaching out to black groups and proposing innovative ideas for reform that would empower black Americans.

Perhaps speaking the loudest is Paul’s aggressive support of school choice. He has travelled across the country, speaking in urban areas and to organizations like the National Urban League, calling school choice “the great equalizer.”

Meanwhile, as Paul knocks himself out to get black kids the opportunity to be free to choose a good school, the Black Caucus defends, to its last politically motivated and self-serving breath, the public school system and making sure that black kids have no choice but stay in it.

So who exactly is fighting for black interests in America?

One of Paul’s stated reasons to oppose Lynch is her support of President Obama’s executive order granting de facto amnesty to some five million Hispanics who arrived illegally in our country.

This again raises the question about who is looking out for black interests – the Black Caucus or the white Republican they call a racist.

These five million illegals, now legal by the simple wave of a presidential wand, overwhelmingly work in low-income jobs. So they now will legally compete for work opportunities with the many low-income black workers, whose unemployment remains twice the national average.

Regarding civil asset forfeiture, organizations across the political spectrum, from the American Civil Liberties Union to the Heritage Foundation, see this area of law enforcement as flawed and badly in need of reform.

In these cases, government – state and federal – officials seize funds from an individual based solely on suspicion of a crime and even though there are no formal charges or conviction.

Minorities are leading victims of this arbitrary tool of law enforcement. According to the ACLU, “Asset forfeiture practices often go hand-in-hand with racial profiling and disproportionately impact low income African American or Hispanic people who the police decide look suspicious…”

But when Senator Mike Lee (R-UT), during Loretta Lynch’s recent confirmation hearing, questioned the “fundamental fairness” of Americans having their property taken by the government without any proof of criminal wrongdoing, Lynch supported the procedure, calling it “an important tool” in fighting crime.

Even President Obama’s current Attorney General Eric Holder recognizes there is a problem. The Washington Post reports that Holder’s Justice Department has just announced intention to issue new rules to curb questionable civil seizures. The Post notes that, according to its own investigation, “Since 2001 police nationwide have seized $2.5 billion in cash from almost 62,000 people – without warrants or indictments.,.”

Yet Rand Paul’s opposition to Loretta Lynch because of her support of this procedure is called “unfounded” by the Black Caucus.

They would rather just call him a racist.