Does Rubio have that Reagan magic?

I agree with Rubio, America is losing ground in the world today because it is not being America. 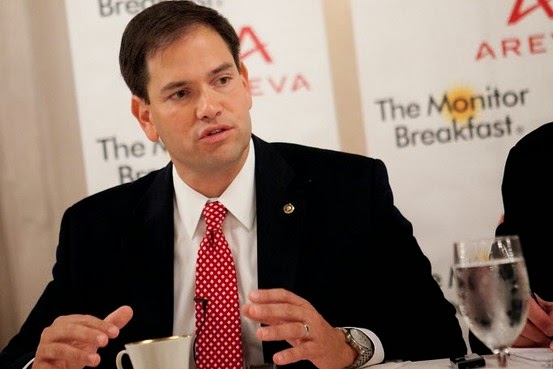 In an Economist/YouGov poll taken May 9-11, among the six announced Republican candidates at that time, Rubio is first, with 29 percent of registered Republicans expressing preference for him. Second is Mike Huckabee at 16 percent.

In an NBC News/Wall Street Journal poll conducted April 26-30, Rubio finished at the top of the Republican field, with 74 percent saying they could see themselves supporting him, and Bush finished second at 70 percent.

Of course, it is very early in the game. But it is noteworthy that this young first-term senator is lighting some kind of fire.

Rubio seems to be harnessing the same kind of charisma that brought him into the Florida House of Representatives at age 28, becoming majority leader at 32, House speaker at 35, and then, at age 38, upsetting Republican Gov. Charlie Crist to capture the Republican nomination for the open Florida Senate seat and winning the general election.

I first wrote about Rubio after the new senator gave an electrifying speech at the Ronald Reagan Presidential Library in 2011.

Rubio said things I liked very much. He said free enterprise creates prosperity, not poverty, and that there are those who remain poor "because something in their lives or in their community has denied them access to the free enterprise system."

And he spoke in a principled but compassionate manner about how we lost our way regarding the proper role of government. "As government crowded out the (traditional) institutions in our society ... it weakened our people in a way that undermined our ability to maintain our prosperity."

On foreign policy, Rubio made a point of critical importance. Talking about the defeat of communism under Reagan, he said that Reagan knew its fall was inevitable, but that America had an obligation to accelerate that fall and "all we had to do was be America."

With all the back and forth today about our nation's role in the world, this central point is being lost. The best way to defeat what is wrong is to be what is right. America is losing ground in the world today because it is not being America.

Everyone knows that big mistakes were made in Iraq. But reducing complicated questions to simple "yes" or "no" sound bites is ridiculous. What is most important is that the central and critical issue driving America's global presence be in focus.

America's founding was based on claims to universal rights. So along with this we must accept universal responsibilities. But if we can't capture our core values and principles at home, how can we possibly do it abroad?

Some are down on Rubio because he supported comprehensive immigration reform and then seemed to back off. But Rubio is clear that he has not changed his mind. He just sees that dealing with the components of this issue sequentially rather than comprehensively is the only politically feasible approach.

Perhaps today it takes an American whose parents escaped tyranny abroad in pursuit of American freedom to appreciate first-hand the meaning of the words on the Statue of Liberty: "Give me your tired, your poor, your huddled masses yearning to breathe free." The failure of our immigration policy is in Washington, and that is where it needs to be fixed.

For sure, America today is off course and badly in need of leadership. Perhaps Rubio's almost Reaganesque mix of genuine idealism and political realism is what is creating interest and excitement.