Many viewed the abolitionists as extremists, fanatics who refused to accept compromise that would permit slavery in America. 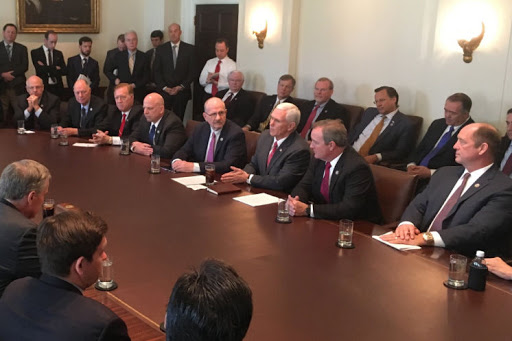 The House Freedom Caucus and its chairman, North Carolina Republican Congressman Mark Meadows, are taking flak, many saying they are responsible for the failure to pass the American Health Care Act.

With all other Republicans on board, a big assumption, the votes of the 29 members of the Freedom Caucus could have made the difference in passing the legislation. But they refused to support it.

Should they be chastised as obstructionists? Are they childish idealists who don't grasp that politics is about the "art of the deal"?

Some go beyond suggesting that these conservatives are naive. They accuse them of being sinister, opposing the AHCA to receive fundraising from right-wing zealots and ideologues.

I say not only is this is unfair criticism, but that the conservative stalwarts of the Freedom Caucus are American patriots deserving high praise.

Let's first appreciate that dealmaking in business and dealmaking in politics and governing are not the same thing. Business deals are about one thing — money. A businessman determines his bottom line. If the deal he constructs doesn't meet it, he walks.

There was a lot of dealmaking in the founding of the American republic and the construction of our Constitution. One of the most famous and consequential "deals" was the accommodation in the U.S. Constitution of slavery and the slave trade.

Arguably, without this accommodation, there would have been no deal. However, the irony of the accommodation of slavery in a nation founded on the ideals of human freedom speaks for itself.

Regardless of how one chooses to look at what happened, what is clear is that a dear moral and human price was paid for making this deal, culminating in a civil war in which 620,000 Americans died at the hands of their own brothers. And the repercussions of this deal are still felt today.

The accommodation of slavery in the founding states then lead to further deals — the Missouri Compromise and the Kansas-Nebraska Act — trying to find ways to accommodate slavery in new territories that entered the union.

All along there were abolitionists. Those who refused to accept any "deal" that accommodated slavery in existing or new states entering the union.

Many viewed the abolitionists as extremists, fanatics who refused to accept compromise that would permit slavery in America.

One abolitionist, Senator Charles Sumner, was attacked with a cane and almost beaten to death on the floor of the Senate after he gave a fiery speech attacking slaveholders.

Abraham Lincoln started off as gradualist on slavery, but ultimately clarified his view that on slavery there was no "deal," no compromise. In his famous "House Divided" speech, he said, "I believe this government cannot endure, permanently half slave and half free. ... It will become all one thing or all the other."

The Freedom Caucus members are today's abolitionists. They see, rightly, how far America has drifted from its blueprint of freedom, and the grave consequences of this fiscally, morally and existentially.

Our health care system was already broken before Obamacare was passed. The factors causing escalation of health care insurance premiums and health care expenditures as a percentage of GDP are because of structural defects in the system, created by government, which precludes it from operating as an efficient market.

Certainly, the American Health Care Act made improvements in Obamacare. But these core structural problems were left intact.

The legitimate point of the Freedom Caucus is that there is no deal on right and wrong, no compromises on our ideals of freedom. We must fight for these ideals because ultimately we will wind up being either all free or all socialist.