On Tuesday I'm taking a stand to protect the Freedmen’s Memorial in Washington, DC after leftist politicians and violent mobs vowed to destroy it.

This monument was paid for by former slaves in 1876 and Frederick Douglass gave a magnificent speech about freedom in front of it when it was unveiled.

After leftists vandalized the Lincoln Memorial, tore down statues of George Washington, set fire to St. John’s Church and vowed to destroy this historic monument featuring Archer Alexander, a freed man who was once a slave, those leftists revealed that racism is not their target. Instead, they want to redefine how our country was founded on a truth they reject. That truth is that God created man to be free. And this truth explains America's outsized achievements.

The left seeks power to transform America. If they obtain it, they will destroy freedom. They will stack the Supreme Court to eliminate constitutional restraint, eliminate the Electoral College to ensure one-party elections from major metro areas, and discard the Senate filibuster to create an unchecked Congress. And they want you and me to go along with it in the name of "racial justice!"

I won't give them one inch! That's why I will stand up and call out their ruse at this important Stand Up Rally in Washington, DC on Tuesday.

Spread the word about my rally so more freedom-lovers like you and me will attend, watch it online, and be encouraged also to stand up for freedom. Visit https://urbancure.org/freedmen and sign our petition that tells Members of Congress to protect the Freedmen’s Memorial. 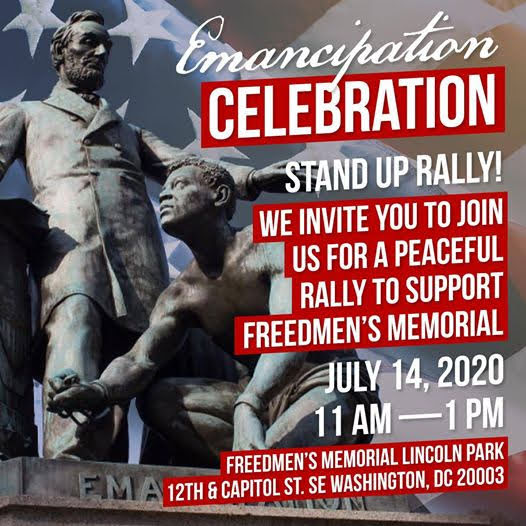 My work is only possible because of the financial support from Americans like you. The Left is flush with cash from corporations and billionaires. But we can win -- and we must win -- because we have the truth. Back my work with your urgent contribution of $50, $80 or $100 or more so we can teach more Americans how to stand up for our country before it's too late.

Your foot-soldier for freedom,